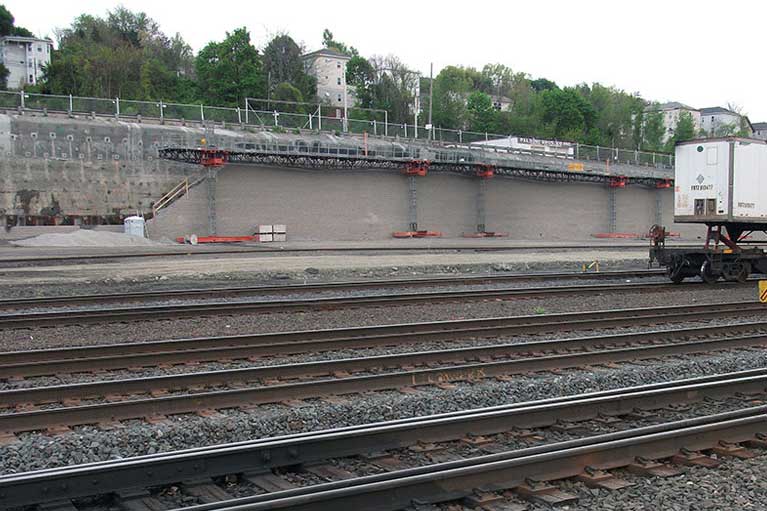 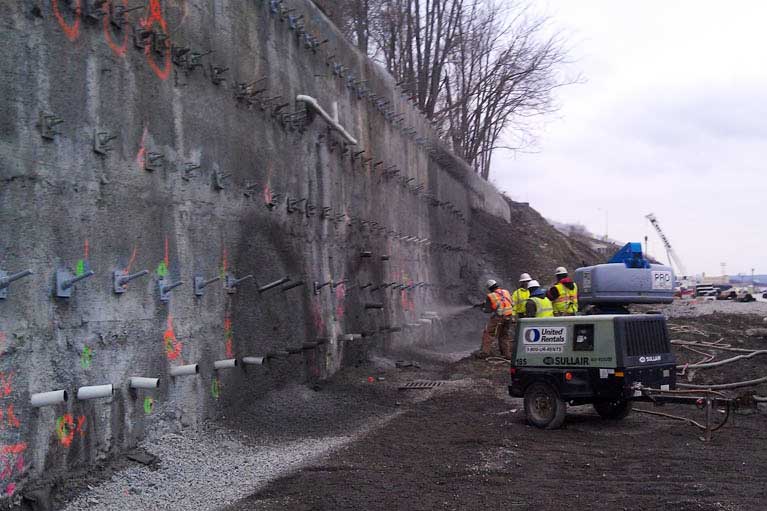 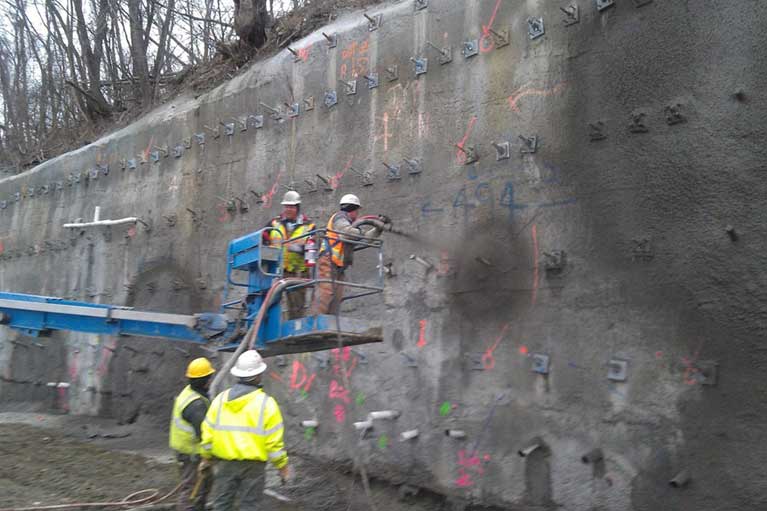 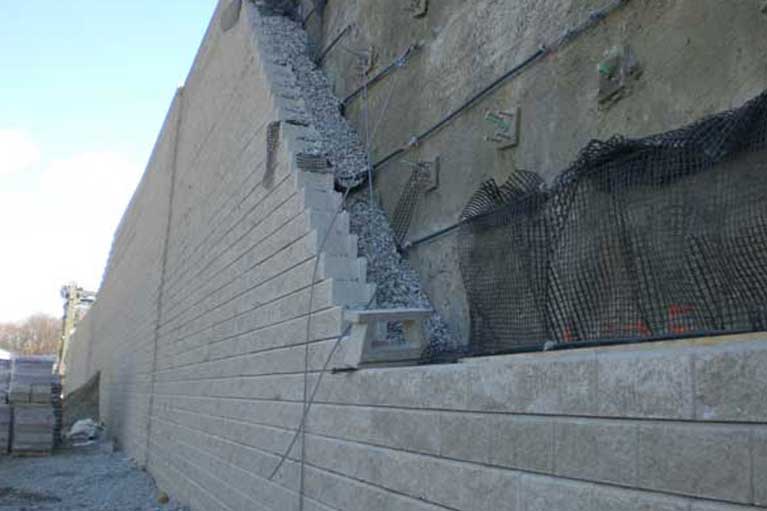 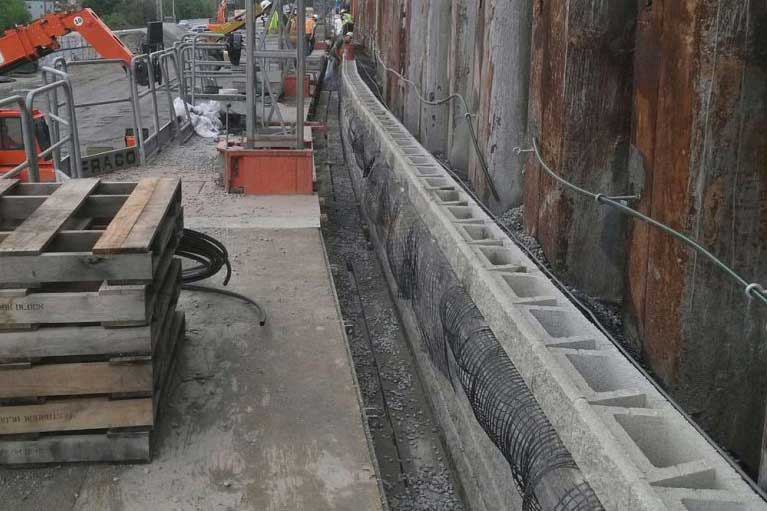 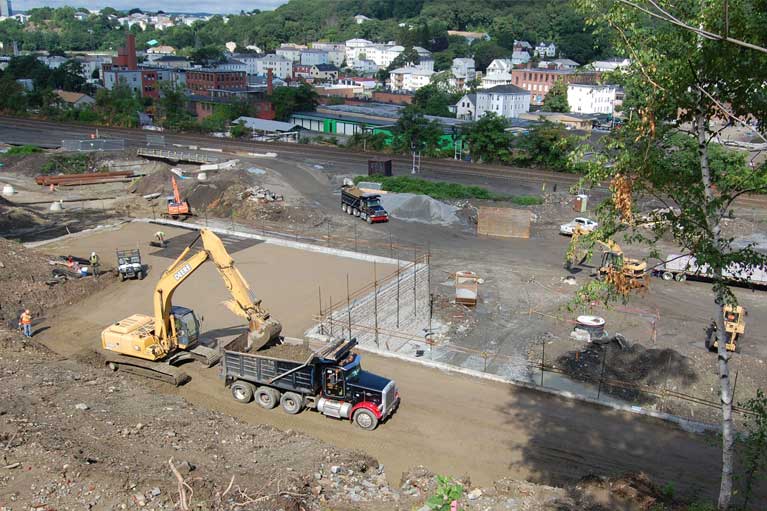 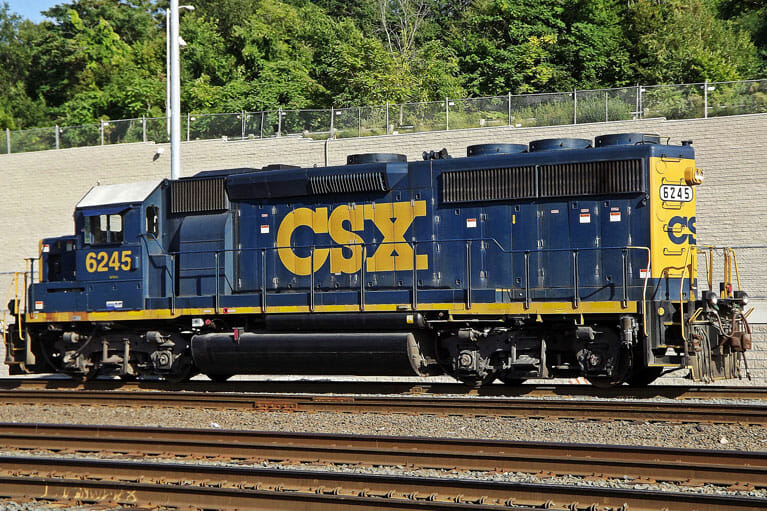 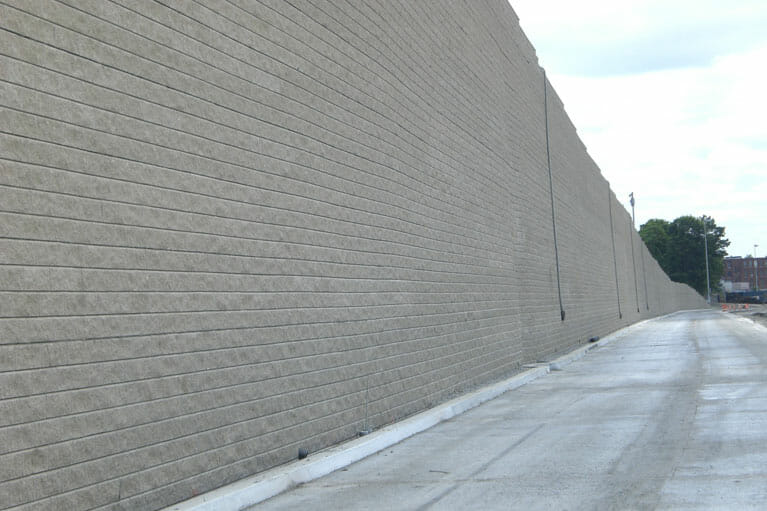 The CSX Intermodal Facility, located in downtown Worcester, MA where space is limited for expansion. Initially, the plan was to use shotcrete and soil nails for most of the project and only a small portion of the walls would utilize geogrid reinforced segmental retaining wall block. Problems with the site soils and the aesthetics of the proposed wall did not allow the initial design to proceed. To solve the aesthetics challenge, the plan was changed from having 15,000-20,000 ft² (1,400-1,800 m²) of geogrid reinforced retaining wall to using Allan Block to face the entire wall including the geogrid and non-geogrid reinforced areas.

Not only did the project encounter multiple design methods for construction, but there were also local utilities that ran behind the wall. Planning for these utilities dictated soil nail or sheet piling placement during construction of the wall. By incorporating multiple soil retention methods, including geogrid, soil nails, and sheet piling along with Allan Block as a facing allowed for a feasible and economical design that met CSX standards for quality and reliability.

As with any project, the designer has many challenges that needed to be identified and overcome. In the case of the CSX project, not only were multiple reinforcement types deemed necessary in the planning stage, but additional areas of poor soils were found once excavation began. This again altered the direction of the final design and required additional areas of non-geogrid walls. In one of the areas of the CSX project, a roadway above and utilities behind the wall did not allow a conventional MSE wall to be used. Although soil nails with shotcrete could usually be used in these applications, poor foundation soils were found which would not allow for the proper bearing capacity requirements of the design. In this case, sheet piling with a soil nail tie back system was incorporated. The tie backs allow the sheet pile wall to be taller and would not disturb the roadway or utilities on site. Although this method of construction is typically more expensive, it was the most viable option because the poor soils on site did not allow other retaining wall applications to be used. Soil nails with shotcrete could still be used in a large portion of the nearly 1 mile long retaining wall (1.6 km), primarily where conditions above the wall made excavation impossible and the wall height did not exceed the bearing on the foundation soil.

An additional coating of shotcrete was placed over the sheet pile walls to provide a more uniform working surface. Then, steel eyehooks anchored to the walls at designed intervals were added.  Through the eyehooks, commercial grade 7 wire cable was threaded, which was tensioned to provide a connection point for the geogrid. Eyehooks and cable assemblies were installed at all geogrid layers from the bottom to the top of the wall sections. When the cables were installed, the block walls were constructed with geogrid layers coming out of the back of the walls which wrapped around the cable and then returned back into the wall at the next course up.

With virtually no access from behind the wall for most of the project length, the contractor utilized a mobile hydraulic lift to safely move material during construction. The final wall was nearly 1 mile long (1.6 km) with heights up to 35 feet (10 m) which accounted for over 110,000 ft² (10,200 m²) of wall.

Although the project encountered multiple design considerations and the construction of the wall took special installation requirements, the retaining wall was a huge success. With proper design and construction of the CSX Intermodal Facility, the final wall exceeded the owner’s expectations and now stands on the downtown site.